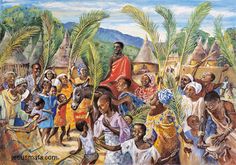 Palm Sunday contrary to what most folks believe and contrary to what many Christians are taught was a political event, with religious overtones. It was a counter demonstration, an organized protest a thumbing of the nose, a throwing up of “the finger” at Roman colonialism and its collaborating Uncle Toms. The boldness of Jesus of Nazareth is in clear contrast to the timidity in the face of injustice, exploitation and oppression shown by most who claim to follow him today.

Titled the “triumphal entry” by many, Palm Sunday is known as the event in which Jesus enters into Jerusalem on a donkey and is acknowledged as Messiah by many who throw palm fronds in his path, to honor him as he approaches the temple in Jerusalem to take part in the annual Passover celebration. But it’s not as simple as that.

The palm frond represents victory. The laying of the palms symbolized the ultimate victory of justice over injustice, right over wrong and the triumph of the spirit over the flesh. It was a physical reminder that” the arc of the moral universe is long, but it bends toward justice.” It was a physical symbol in the spirit of the triumphalist protest chant, WE WILL WIN, reminding us that in the end; someday, somehow, US Empire will fall. And in this world, on that day, at that time all of our tears will be dried, every man and every woman will have a roof over their heads, bellies full, clothes on their back and live in peace with their neighbors and “no one will make them afraid.”

Similar to today when many cheer on the so-called “leader of the free world” when he appears there are those who organize counter protests, or a counter demonstration to bring attention to unjust policies the president oversee’s that bring misery to the masses.

While some cheer the presidential motorcade or appearance, others wave signs protesting the government’s interference and intervention in Venezuela, its inhumane treatment of human beings at the US Southern border, mass incarceration, welfare cuts, lack of quality public education, police and racist violence, racial injustice and injustice in general. The signs may also call for a national minimum wage of $15 an hour, treatment facilities for the nation’s blossoming drug addiction problem. Or they may be calling for the government to stop killing people with their drones, close Guantanamo Bay, get out of Iraq and Afghanistan and stop supporting Israel in its oppression of the Palestinians.

Today’s protest would include conscious people from all walks of life, just about everybody except Christians, the vast majority of whom instead glory in US empire and its materialism, militarism and narrow provincialism that excludes Blacks, Browns, People of Color in general, immigrants and others of God’s children, while it celebrates all things White and wealthy!

Unlike his modern followers, Jesus challenged the system and its very unjust rule. He was opposed to Roman colonialism and their occupation of Palestine, just as most of his fellow Palestinian Jews were at the time.

Biblical scholars point out that the Passover celebration, or the Feast of Passover was a “volatile” time. The holiday revolved around the story that the Israelite God had delivered the Israelites from slavery and captivity by the Egyptian Empire.  This deliverance was the central theme of Judaism.  Thus the celebration heightened their dissatisfaction and anger at Roman occupation and oppression and increased their desire for independence. Every year it served as a focal point for nationalist aspiration and on occasion it lead to attempts at insurrection and revolt.

Consequently, the Romans would send a legion or two to Jerusalem to prevent and discourage Jewish anti-colonial rebellion.

So Jesus took advantage of the Passover to lay down the gauntlet, so to speak, a peaceful but militant and disciplined protest of Roman Imperialism.

He and his disciples organized a counter demonstration.  It was organized like any other protest: someone secured a donkey, organized a starting place for the rally and march, distributed flyers, put up posters all over Jerusalem and put the word out on their version of social media, and created an ancient equivalent of a Face Book event.

As the Roman governor Pontius Pilate approached Jerusalem from the west, he would be proceeded by  the sound of horns, seated on a horse decked out with jewels and gold, followed by the Roman Legions, soldiers on horseback and soldiers on foot with shined weapons and spears carrying banners and sticks with the golden Roman eagle prominently displayed.  Some theologians have pointed out that the Romans would roust everyone from their homes and force them to cheer on the royal parade.

Pilate’s was a colonialist show, a demonstration of the power of Empire.

In the meantime, Jesus held a march from the east, the Mount of Olives riding on a donkey clearly mocking the powerful Roman show of force. The people of their own will spread palm fronds in front of him and shouted Hosanna.  His countrymen understood the message he was sending as his followers start the rally shouting a familiar Old Testament text from Zechariah 9:9 “Shout aloud, O daughter of Jerusalem! Behold, your king is coming to you, humble and mounted on a donkey.”

As one scholar put it, “The donkey also signified the ancient triumph of the tribe of Judah. It is not just a ride for Jesus; it represents a symbolic fulfillment of ancient dreams of Israelite sovereignty, and thus is tantamount to a declaration of independence.”

Therefore it was impossible to believe that anybody including the Roman authorities misunderstood the point of the protest. The Messianic theme served as background for the idea that God desired the people of Palestine and ultimately all peoples to be free of colonial oppression and injustice.

Jesus on Palm Sunday stands in opposition to colonialism, Imperialism, unjust  power structures  and stands on the principle that nothing ultimately belongs to the unjust power structures of the world, but rather, “the earth is the Lords is the Lord’s and the fullness thereof” and God desires all of its inhabitants to enjoy peace, prosperity and justice.