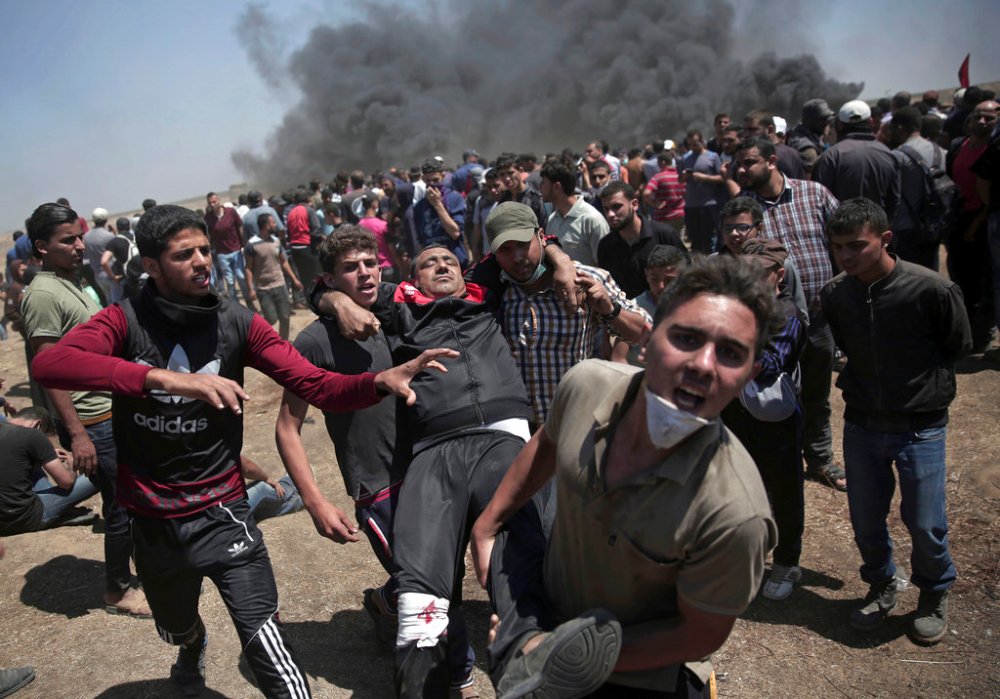 The New York Times headline on Monday about the butchering of Palestinians in Garza read “28 Palestinians die….,” as if they just died on their own or of natural causes. But these Palestinians (last reports were 58 dead and thousands more shot and wounded) were murdered by Israel because they have little to no fear that the US will even slap its wrists, because they are officially the US’s partner in the Middle East.

But considering the US bombing of Syria based on reports that the Syrian government gassed its citizens, ironically reports that still have not been confirmed, shouldn’t the US have a similar response to Israeli’s outright murdering of Palestinians?

For those in doubt using the term murder to describe what has been going on in the Gaza strip is not hyperbole. Over the last few weeks before Monday’s slaughter dozens of Palestinians were killed and hundreds have been wounded, while the world seemingly looked on. If murder is as Wikipedia broadly defines it,”the unlawful killing of another human without justification or valid excuse, especially the unlawful killing of another human being with malice aforethought,” then the Israeli’s are guilty!

And isn’t it the US that has gone around the world calling out nations who mistreat their citizens, real or imagined? Didn’t the US bomb Libya and depose Muammar Gaddafi.  This administration recently tore up a deal with Iran and is threatening North Korea because they are considered “rogue” nations. And last week the US government went on record calling for regime change in Venezeula.

Without an ounce of regret, human compassion, or sense of irony, the Israeli Prime Minister claimed today that, “our brave soldiers are protecting the border of Israel as we speak today.” Netanyahu failed to mention that his brave soldiers were shooting defenseless and unarmed women, children and elderly, who were in fact a safe distance from them and their barbed wire wall. Brave? Cowardly, inhumane, heartless are more appropriate descriptions for their actions.

The callousness toward human life demonstrated by the Isreali’s is astounding considering they never ever ever let anyone forget they were victims of a Holocaust. “Never again” they say while presently orchestrating “a kind of Holocaust” of their own.

So why is Israel given a pass? Why the silence? Why the complicity?

Israel has a right to defend itself as the tired phrase goes.  In other words, Israel is the victim, the Occupied West Bank and Garza are oppressing them with their demands for a return of their land and a semblance of justice. Israel is defending itself from these outrageous demands, by any means necessary and the US backs this claim. It is what they really mean when they say Israel has a right to defend itself.

According to the US Principal Deputy Press Secretary Raj Shah the Palestinians made the Israeli’s kill them. “The responsibility for these deaths lies squarely with Hamas. Hamas is intentionally and cynically provoking this response. Israel has the right to defend itself,” said Shah whose remarks reflect “real” cynicism! Considering he dishonestly implies that cursing and stones fired by sling shot and burning tires presented some kind of real threat.  He also called it “a gruesome and unfortunate propaganda attempt,” proving yet again that some people will do and say anything for money.

Jared Kushner said something similar in his remarks at the opening of the embassy in Jerusalem, but at least he had the decency to look stupid as he was saying it.

Israel is also coddled because they are White, or honorary Whites. Only White people can kill people, especially people who don’t look like them [Black people and POC] and get away with blaming their victims for their own deaths. Victim blaming especially blaming Black folks for their own victimization is almost sport in the US, engaged in by a significant amount of the White population, immigrants who ought to know better and a few Uncle Toms and Aunt Jemima’s.

By establishing an embassy in Jerusalem the US sweeps away all pretense; it favors Israel in their conflict with Arab Palestinians.

Incredibly, the amoral US president Donald Trump said his country “remains fully committed to facilitating a lasting peace agreement.” What Trump means is a kind of Pax Romana, in which peace is achieved by vanquishing those that seek a justice.

Harry Truman’s when asked why he so quickly supported Israel at its inception responded, “because there is no Arab constituency in Washington.”

The Zionist vision of “a land without a people for a people without a land” is slowly coming to the fore. Israel’s policy is becoming clearer it plans on eliminating the “Palestinian problem” by taking more and more land, depriving them of sustenance, starving them, locking up and criminalizing their children, limiting their education, limiting their economic progress,  limiting their ability to work and be productive and ultimately depriving them of hope. And if need be kill them outright, as evidenced by their recent killing and by their incursions in the West Bank and Garza over the last decade.

And the US and its callous supporters will support them in their efforts, because after all they are allies.