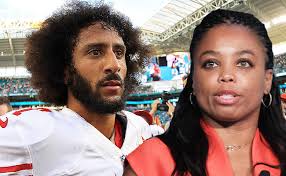 Vice president Pence, Dallas Cowboys owner Jerry Jones, ESPN, President Trump, NFL Commissioner, corporate America and the .1 percent are all ganging up on a handful of Black professional athletes and a sports personality. Why? Because the power structure knows its history, they know that dissent has a way of catching fire and it already has, so they want to STOP THE PROTESTS “by any means necessary.”

Consider the suspension of Jemele Hill, which doesn’t make sense considering that she is paid to offer her opinion on her ESPN sports show. But it makes sense from the corporate perspective. They can’t have Black folks running around telling the truth and encouraging resistance. Can’t you hear the execs now mumbling to themselves over and over, ‘did she say boycott?’

This chapter in US history is similar to the late 1950’s and early 1960’s when the power structure instructed its minions to get the protesters out of the streets. Make concessions, make promises even if they can’t be kept but get those people out of the streets; STOP THE PROTESTS. They understand that revolutions begin with some deeply felt grievance. Remember the US revolutionaries of 1776 screaming about “no taxation without representation.”

This is a sign of desperation, STOP THE PROTESTS is what they are pleading. Hill made it clear she wasn’t calling for a boycott, but she did provide details on how it can be accomplished. 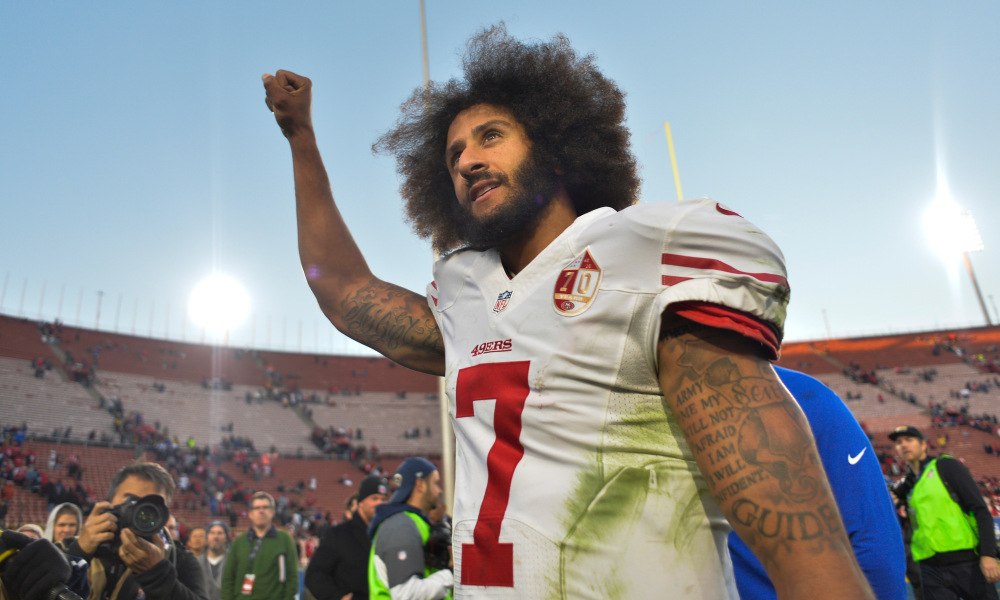 The NFL thought it had STOPPED THE PROTEST, when it conspired to keep Colin Kaepernick out of the league. That’s called collusion and it supposedly illegal. Incredibly some dishonest sports writers continue to make excuses for the NFL’s obvious black(white) balling of the quarterback.

But to the chagrin of the “exploiting class,”” the money grubbers” and “parasites” (that’s what they are) that didn’t STOP THE PROTEST young people are still putting their playing status on the line by taking a knee.

“The powers that be” understand the power of symbolism and a gesture. They could care less about the US flag or the national anthem. Those are simply symbols to keep us suckers in line.

All American companies like Ford, GM, Carrier, Apple, Nabisco, claim to be patriotic and stand at attention for the national anthem, while taking jobs and work away from US workers, as they pledge their true allegiance to profit making, which keeps them on an endless pursuit of cheaper work forces and larger profits.

And no entity has disrespected the military more than the US government which has historically treated veterans of its incursions poorly. When vets have come home from the US war on Vietnam complaining of sicknesses caused by agent Orange the defoliant sprayed on Vietnam to kill vegetation and the flora and fauna. The government denied them help and only acknowledged the problem after public outcry.

When the veterans of the First Iraq War complained about Gulf War Syndrome again resulting from some of the weaponry used, the US government again denied its existence and denied benefits to veterans suffering from it.

When it was discovered that troops returning from US interventions and invasions of Afghanistan and Iraq were suffering from PTSD as a result no doubt partly from fighting an unjust war and witnessing or participating in the mistreatment of the enemy, the government again balked, intentionally ignoring vets who needed help.

It was only a few years ago that VA hospitals were counted among the worst in the nation. So much for loving the military, but STOP THE PROTESTS.

And the NFL only recently as 2009 began standing at attention for the national anthem, after they began being paid by the Armed Forces to put on patriotic/militaristic displays.

So much for patriotism!

While the powerful are probably aware that movements seldom start at the top (artists athletes and entertainers don’t usually have the ability to sustain a movement) they understand the power of those in the spotlight to keep the flames of discontent lit.

And that explains Pence’s departure, the president’s bullying, Jerry Jones ultimatum, Jamele’s firing and NFL commissioner Roger Goodell’s attempt to water the issue down, by talking about “strengthening their communities.” STOP THE PROTESTS is their agreed upon mantra!

“The powers that be” are convinced that if they can bully the athletes to STOP THE PROTESTS everyone else will follow suit and the challenge to THEIR COPS will subside and the country will go back to “business as usual,” that is, the casual acceptance of the killing of citizens by cops, as a normal and acceptable part of Americana.

”The protests are meant to spotlight racism and police brutality, and players are engaging in a gesture that affords the subject its most visibility,” pointed out a Forbes opinion writer”

This is why the Bosses are trying to STOP THE PROTESTS! But protest we must. The protest must continue. Everyone should add their voices and join your local protest this Sunday at an NFL stadium near you!