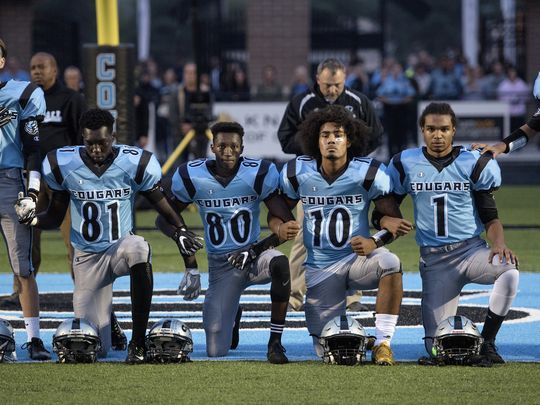 Do Christians worship God or flag and country? This is a fair question considering that the most intolerant reactions to young people taking a knee during the national anthem have been White Christians and Christian institutions.

Over the last few weeks people have watched in amazement as institutions and people who claim to be bastions of love and tolerance and dedication to God have lead the nation in intolerance.

In Crosby, Texas the Victory and Worship Academy High School felt so strongly about two young Black football players taking a knee that the coach Ronnie Mitchem made them strip out of ALL their football gear in view of the entire stadium, in what appeared to be attempt to publicly humiliate the young men.

Afterward the coach who is a former Marine said, “I have nothing against the young men, I love them both,” Mitchem said. Strange love indeed and he never explained what Christian principle, rule or tenet the young men broke.

In Lansing Michigan, Lansing Catholic High School Friday night, chose to bench four Black football players who very diplomatically informed the school of their plans to kneel during the national anthem. After appearing to be sympathetic to the students cause, the administration asked the students not to kneel the week before because it was a road game. But the school reneged on allowing the protest and decided to bench the young men.

When the young men revealed to the public what the school had done the Christian institution responded by lying and saying they had not said they would bench the young men, but they would only be “benched” at the beginning of the game if they chose to kneel.As one of the parents pointed out,” benching is benching.”

“After much prayer and reflection; in consultation with our Board of Trustees, with the Superintendent of the Diocese, with administrators at other Catholic schools, and with law enforcement, we will continue to hold our student-athletes to the expectation that they stand for our National Anthem,” a letter sent by Maloney said.“ Any student-athlete who chooses not to stand will receive consequences. As always, this will be handled with Christian Charity, with the goal of growth in virtue.”

Sooo after much prayer and reflection and consulting with as many responsible Christians as they could find and the local cops they decided to embarrass a group of teenagers. And they thought this was Christian and charitable? Is the kneeling for the National Anthem a part of Catholic/Christian dogma?

Incredibly the letter from the school cited security concerns as another reason they were opposed to the protest, writing the protest,“could create an unsafe situation for any student involved.” So they were afraid that Christians from the stands would attack them?

One of the players benched was the first string quarterback who was quite articulate in his defense of his decision to kneel to protest police violence and racism.

“I get that they are a private school and that they can do what they want,” said quarterback Michael Lynn III. But that doesn’t make it humane and that does not make it OK that they can do that because that still is my right to peaceful protest. Not only am I peaceful protesting, but I’m protesting as a primary source. I am a young Black man in America… This feels like oppression. This feels like you’re trying to silence me and it feels like you’re not giving me the right to do what Americans should be able to do.”

At a Los Angeles Lakers game last week a very bold White college student threw her soda on two Laker fans of color after they sat for the National anthem. The student said “This is for the national anthem F—rs” as she threw her coke on the peaceful protesters. She later bragged about it on twitter. “Take a kneel for the land of the slaves. Disrespect the flag and our country and that’s how we will react.”

The extreme reaction of Christians,(especially White Christians) to people taking a knee is in direct contrast to its extremely weak, reserved and feeble effort on behalf of justice, especiallyon the issue of police violence.

The fact that these Christians have attacked People of Color asserting their rights is telling as well. Too often Christian institutions are worse than secular ones, as they act as if they are doing Black folks a favor whenever they allow them in their mix. It is as if God belongs to them.

Christian human relations are supposedly guided by the dictate to “love one’s neighbor as oneself.” Oddly it seems in this US Christendom appears to love things and symbols in this case the nation and its flag more than they do people.

Surely throwing soda, humiliating young people, and benching them because they want an end to the senseless murders of human beings by the State, is not consistent with following a loving god that holds its Creation as sacred. And it surely cannot be considered loving one’s neighbor as oneself.