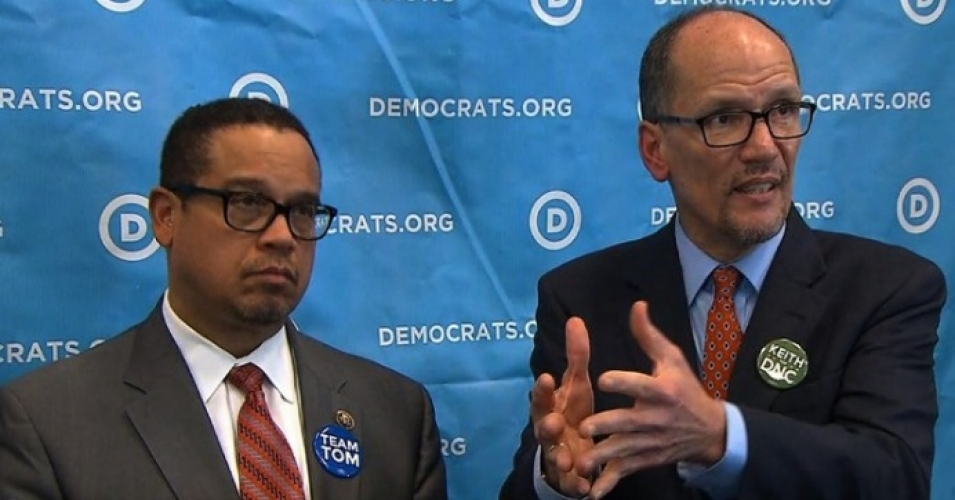 As the saying goes, “when someone [or something] shows you who they are believe them.” The rejection of US Representative Keith Ellison’s bid to head the Democratic National Committee (DNC) reveals that the DNC is what they have always been the other branch of a two branch tree (Democrats & Republicans) that exist to represent the rich, while pretending to have an interest in the needs, wants and desires of working class America.
As one delegate put it, “They are not going to be in touch with the people and they are not ready to move in a new direction despite the rhetoric.”
The very patronizing suggestion that the Congressman be the face of the DNC, while inventing a last minute deputy director position to appease him and his fans, was akin to giving him the Ms. Congeniality award in a beauty contest.
Moreover it seems the Democrats made Ellison the FRONTMAN, while making him use the BACK DOOR. They suggested he is the SOUL of the party, but it seems they meant the SOLE, as they walked all over him. They have asked him to be the WELCOME MAT while treating him like the DOORMAT. His strength is his appeal to the working person and the “HOOD” but it’s more like he is the HOOD ORNAMENT on the Democratic broken down, beat up lemon of a “hoopty.”
The Congressman asked supporters to trust him as he supports the party, but how can we trust a party that didn’t trust him, the obviously best qualified candidate to lead it? Keith is no doubt a good man, a good father and an overall good human being. And he seems to believe in the efficacy of this party, even in the face of evidence that it is far from the working person’s party.
However, Ellison like many others, badly wants the Dems to be something they are not, at some point we too have to face our reality.
Reportedly, the initial reaction to the selection of Perez by Ellison supporters was the shedding of tears. I suspect the tears are an indication of the recognition that no one is going to save us, but us.
Tears may also have been the result of the realization that the party, by, of and for the rich, is just that, and it ain’t got no room for us or our tears.
It’s also likely they came because of the pain that comes from the admission that one has been took, mislead, hoodwinked, as Malcolm X would have put it.
To be fair to the Democrats, they never said they were the party of the Black, the Brown, the Red or the White working class for that matter. And they surely didn’t claim to be the party of the oppressed. They aren’t the party of the working person.
The historical record is clear.
The efforts by Franklin D. Roosevelt during the Great Depression, that brought us Social Security and the safety net in the form of welfare, came because the capitalists were afraid that the working class would rise up and take power and stop begging. Blacks were hoodwinked by John F Kennedy’s rhetoric and the fact that he used federal power to get MLK out of jail. Many were further tricked as a result of Lyndon Johnson’s signing civil rights legislation, and launching of the War on Poverty, but those efforts came as a result of people in the streets and not the lobbying in the suites. Bill “Slick Willie” Clinton took away welfare as we know it, locked up and out record numbers of Black people, while convincing Black people that he was the first Black president. And the real first Black president….
Great disappointment only comes from truly believing in something. People’s hopes have long been misplaced in the Democratic Party and its time we face the truth. If anything is going to change in this country it is going to have to be done by the people themselves. The people are going to have to organize their own party, with its own set of demands, knock on doors for themselves.
And it will have to be led by working class folks not petite bourgeois softies, who would give in to the rich folks as soon as their needs are met.
Failure to make Ellison the DNC chair tells you all you need to know.
And people shouldn’t miss that former president Barak Obama helped lead the charge to deny the Congressman, the position though he was the most qualified. HMMM! Keith is the same guy who wore out a good pair of shoes on the campaign trail for Obama.
But he too was afraid that Ellison’s old activist roots might catch up with him and feared like the ruling class, that Ellison would write social justice checks that the party wouldn’t be willing to cash.
Even with Ellison at the head it wouldn’t have changed the fact that the Dems aren’t the “party of the people” but it sure would have looked a lot more like it.
justice then peace