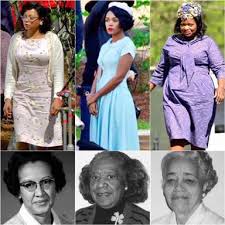 Anger was my initial reaction to hearing the stories of Kathrine Johnson, Dorothy Vaughn and Mary Jackson. And I was still ticked after I viewed the screen adaptation of their valiant stories. Why wasn’t this ground breaking and important work by these Black women popular knowledge? The fact that this was hidden is proof of the low down, rotten, underhanded, dishonest and mean- spirited history of this country.

This is a feel good story of triumph, say some well- meaning, but rather naïve folks. Unquestionably this was a great film acted by three brilliant Black women. Taraji P. Hensen, Octavia Spencer, Janelle Monae deserve all the accolades that have been tossed their way. Janelle Monae? Who knew?

But this is a story of a crime. Modern re-interpreters, revisionist and some reviewers have placed it within the purview of women’s rights, while downplaying the much more uncomfortable revelation of the racial caste system that existed in 1960 Virginia and the southern USA. Many have tried to place the focus on the fact that these are women who have achieved against the odds. But it would be dishonest to claim that it was their sex alone that motivated their ill treatment, rather than the fact that they were Black and Black women.

Not only was the women’s treatment at the hands of Jim Crow criminal, but they (the keepers of the racist flame) compounded their evil by hiding this story from us because they “powers that be” knew Blacks potential, but instead nursed the lie of inherent inferiority.

It’s criminal because the same government that supported, enabled and parroted this tale knew the truth all along.It explains why the US space agency didn’t hesitate to look for qualified “computers” among Black women.

Consequently, it’s logical to suspect that “the powers that be” were well aware that if Black folks got a glimpse of their full potential, they may not rest until they reach it. They just may work hard as hell to get to where they know they belong; among the stars. But if you don’t believe you can do anything well, if you think you are inferior, then just being above ground is enough; forget about reaching for the moon. In fact you will be grateful to just have a place even if it is at the bottom of the barrel, even if it is on the lowest rung or on the back of the bus. Because maybe, just maybe according to your subconscious mind that is where you belong.

Even the other folks’ ice will seem colder.

Imagine what my classmates attending segregated academies in the 1960’s excelling in math and science could have done, had they been exposed to all that they could aspire. But they weren’t familiar with Black doctors, Black engineers, or Black scientists. They had heard of Charles Drew and his genius. They knew Drew invented blood transfusion, but died because he couldn’t get one because he was refused admittance to the nearest White hospital. They had heard of George Washington Carver and his magnificent and ground breaking work with the peanut. But they also knew that he had been castrated.

Evidence of how positively this may have impacted the broader Black community at the time can be seen in the response to the film by many young girls around the country. Aldis Hodge has reported that the cast is “constantly doing panels for STEM and STEAM [Science, Technology, Engineering, Art & Design, and Mathematics] all over. It’s taken a life of its own.”

Arguably,the most poignant moment of the film was the interchange between Vaughn (Octavia Spencer) and her boss played to perfection by Kirsten Dunst who said she had nothing against Black folks, Spencer’s response was timeless. “I know you believe that,” she said.

When Kathrine (Taraji) let loose what she had been holding in for months, you could feel her pain. It was a pain felt across generations. It’s the same pain felt when the professor tells the young Black woman that ‘this can’t be your work’, or the pain of hearing, ‘you are not like the others,’ or the pain of folks looking at you with that, ‘you must be the Affirmative Action hire or student’ look. Nowadays they have taken down the signs but the pain can still be felt in the little cuts we now call micro-aggressions.

We don’t know if John Glenn’s portrayal as a tolerant and decent and fair-minded White man is historically accurate, but it’s likely the White folks backing the film required it. Undoubtedly it needed Kevin Costner who was stellar as the big boss, to dramatically tear down the Colored bathroom sign. It made the audience a little less uncomfortable and fulfilled one of the requirements of this type of film: ‘Thou shalt have at least one White savior.’

Some walked away from the film feeling good about our racial progress ( it is a box office hit) but truth is we haven’t progressed as much as we want to believe. What people should come away with, is a determination to make sure that this does not happen again, as the US seeks to make itself “great again.”