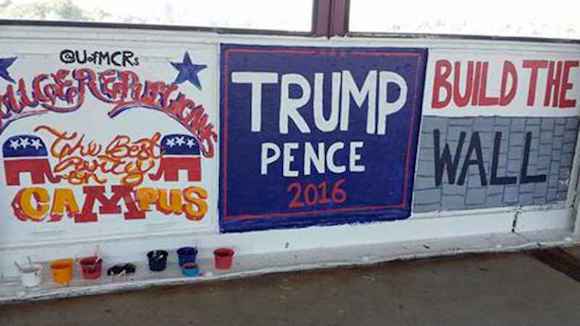 Proving yet again that those with power and influence are as clueless as anyone else the University of Minnesota president Eric Kaler defended as free speech the campus Young Republicans not so subtle attempt to denigrate all things Latin when they painted a sign on the West Bank wall saying “Build the Wall.”  Making matters worse he chastised students who simply tried to paint over the insulting phrase and made it appear that were worse than the folks who in essence were saying Mexicans go home.

Liz Sawyer of the local Big Business press the Star Tribune tried to run to their defense as well writing an article that said that the rebuke of the students who painted over the sign was a lesson in free speech.

Only the dishonest can pretend that “build the wall,” is anything other than hate speech. The statement is not borne out of the need for new policy when it comes to Mexico, but its borne out of hatred and dislike for those who don’t have a European pedigree. Every honest person knows its code for go back to Mexico, or just a middle finger aimed at our Latino brothers and sisters. It’s an anti-immigration statement. Donald Trump advocated for building a wall between the US and Mexico because he wanted to appeal to xenophobes.

At bottom it is the language of proto-fascist thugs!

Of course the blatant irony in all this is just about everybody trying to tell folks to go back to where they came from originally came from somewhere else and it wasn’t that long ago.

Sawyer very unobjectively stated as fact the idea that students had learned a lesson in free speech though no one she interviewed said so. It’s likely she thinks she struck a blow for the cause of free speech, but she would be as wrong as her analysis.

Moreover they learned that the Young Republicans are just young sniveling cowards, who possess so little confidence in themselves and their position that instead of taking their perspective to the University square and testing their ideas against those of their peers instead, took a cheap shot

“The University of Minnesota supports a campus climate that welcomes all members of our community and our values of equity and diversity,” wrote President Kaler, “but that also ensures the free flow of ideas, even those that are offensive to some .People in our community may disagree with the sentiment expressed. However, while the University values free speech, the subsequent vandalism of the panel is not the way to advance a conversation.”

But scribbling hateful signs is advancing conversation? And signs implying some students should go home are welcoming?

Oddly Kaler wasn’t as vigilant in defending the rights of the four Black football players recently suspended apparently without due process, simply because they were accused of wrong doing.

A real leader would have used this as a teachable moment.  They would have pointed out that while you have the right to say what you want, you should also be willing to take responsibility for whatever harm your speech causes. A real leader would have organized a debate on immigration on campus while pointing out that real free speech is that which adds to the pantheon of ideas that helps advance the ideas of human solidarity and unity

The Young Republicans response is telling: “Our party’s nominee supports building a wall on the Mexican border to stop the flow of illegal immigrants into this country. We understand that some students may disagree with this policy position. However, free speech is at the center of a functioning democracy, and the action taken against our panels runs contrary to free speech.

While free speech may be at the heart of a democracy, Xenophobia and hate speech are central to fascism.

The sign was divisive, a pejorative, a provocation.  It was a like throwing an insult and then hiding under the president’s coat, or behind the Constitution.