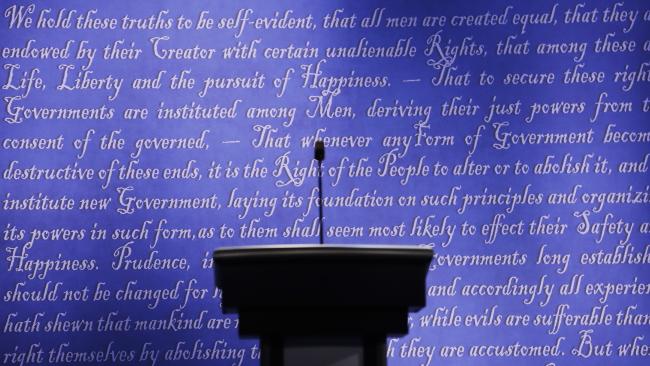 Of course there was no real debate last night because at the end of the day the two rich folks are committed to the system that made them rich, everything else is superfluous. The most important part of last night’s debate was  not who looked most presidential, nor what was said, what should have stood out  was what was not said and who was not on the stage. And if you looked at the background of the debate the writing on the wall had the prescription for what ails us poor working folks.

Jill Stein the Green Party candidate was literally escorted by the police off the Hoftstra campus yesterday. Gary Johnson of the Libertarian Party wasn’t invited and of course the candidates of the various Socialist and revolutionary parties were left out. Lots of folks run around bragging about ‘us live in a democracy,’ but in democracy isn’t candidate given a chance to be heard. Some will say I haven’t heard of the Green Party though they been around for quite a few years because you don’t see them on TV. Exactly!

The debate was a farce it was organized by the US ruling class masquerading as two parties. Even the questions were scripted by them. Yes Lester Holt wrote his own questions but he is firmly in their camp they didn’t have to tell him what to ask he knew automatically what to do.

Forgive me but,’I don’t believe Massa Bill’s wife is gonna give us free”. Massa Bill’s wife watched quietly while we wuz bein whipped and caged (mass incarceration) when Massa Bill decided we gonna have less gruel (food, Welfare) she didn’t say a word. Take that back, she did say some of our “chillin” wasn’t fit to eat (superpredators). When we complained about the patty rollers ( the first cops) and how they treated us she said we just had to understand “dem” cause we too got the implicit bias in “usem” too’

Seriously, the Democrats are not talking about instituting single payer universal healthcare, which even those silly enough to think they don’t need it want. We want an end to mass incarceration find a way to stop these prosecutors from automatically sending everyone to prison. White middle class folks children are dropping like flies from heroin overdoses and the synthetic imitations but not a word about treatment centers for those saddled with drug addiction. Nobody agreed to spend $600 billion on the military budget with a third of that money we could put people to work rebuilding the deteriorating infrastructure. Most want a moratorium on guns and marijuana laws at least until we can get some things sorted out.

The public schools are failing us all over the place children are being deprived of their right to a free education by the lackadaisical system tasked to teach them. Police are dropping people all over the place Black, White Latino Asian young old including the mentally ill. In a real democracy this would be brought to a halt by the automatic firing of anyone who intentionally hurts a citizen with automatic prosecution. And everybody knows the polar ice caps are melting and that if the global capitalist don’t adjust we are all going down anyway.

Ironically, the backdrop to the debate was the US Declaration of Independence (read it, it’s on the wall behind the candidates). Right off the bat the Declaration tears a hole in a few popular arguments. One of my favorites is “you can only change things from the inside.”Tell that to Jefferson, Washington, Paine Patrick Henry and the crew. The Declaration shoots holes in the idea that you have no choice but to go along with the status quo.

On the eve of rebellion the British crown offered them a choice of the lesser evil. Oddly though evil is the purview of the religious world I am not familiar with the theological community parsing evil in this way. Evil has always been evil period. That expression ranks up there with terms like being “a little bit pregnant”

The colonists wanted to be free. Patrick Henry said “give me liberty or give me death.” They didn’t do die ins in front of the kings men nor did they beg the King to stop killing them or run around giving free hugs, or saying, ‘all of the King’s men aint so bad.’

Someone suggested that Trump is the Republican nominee for president for the purpose of making Hilary Clinton more palatable. Not sure I agree with that assessment but it is starting to look more and more like there is some truth to the statement.

In a real democracy we would be looking for candidates who agree with our platform and seek to make things right for all of us not just maintain the status quo which benefits the many for the sake of the few.